The immigration window at Ho Chi Minh airport was staffed by silent Vietnamese officials with stiff posture and stern expressions. I held my breath when I showed the letter of invitation I’d bought online from a visa service to a man with machete-like cheekbones.

The official accepted my paperwork but didn’t return my smile. “Photo?”

Someone came out of the office, snapped my mug shot, and sent me to wait with the other visa applicants, who were crammed together in mystifyingly tight rows of plastic chairs, a sweaty island of people floating on a vast expanse of concrete floor. Some were hunched over, scribbling and erasing furiously against forms propped on their knees. The rest stared silently at the ticking clock high on the dingy wall. Their expressions ranged from irritation to terror. I joined them and stared at the clock, too. I don’t know what my face revealed.

What would I do if they refused my admission? Leave, obviously. Buy an overpriced, last-minute flight to Malaysia or Singapore and forfeit the money I’d paid for my Cambodia tour. It was only the second time I’d ever splurged on a tour. The first time was last winter, when  I had to sacrifice my trek in Ethiopia due to the hip issues that sent me home. I still hadn’t financially recovered from that nightmare.

What if they hinted for a bribe? The locals tell me that’s very common all over this part of the world, though I don’t think they hit up foreigners as much as they do each other. How much should I offer if they refused to let me in? I was sweating, from nerves or heat or both. How could such an enormous room be so airless and stifling? I had to consciously settle my thoughts, focus on my breathing, on the pause at the bottom of the exhalation, using my yoga training to settle my racing thoughts.

Eventually, my name was called and an official gruffly slid my passport with a visa inside across the counter. I was so relieved and so happy to step outside in the fresh air.

Hello, Vietnam! Hello Ho Chi Minh City, or Saigon, or whatever you’re calling yourself these days! It sure took me a long time to get here.

Seven years ago, I’d been invited to teach for four months at Saigon Bellydance. Craig and I had been dating for about three months then. We were in the tender, early stages of our relationship — traditionally a horrible time to tell someone that you’re leaving the country without them. We were having one of our lunchtime picnics at Lafayette park, and it was perhaps the first time he met me wearing glasses instead of contacts, which was strangely touching because it meant he was starting to let his guard down with me.

When I awkwardly blurted out my news, he froze for a second with his sandwich halfway in his mouth. Then he looked at me and said “Well. You have to go. Maybe I can come visit you halfway through? We’ll talk every day on Skype.” He didn’t even have to think about it. That may have been the very moment I fell in love with him.

My heart breaks for us both when I look back at how innocent and vulnerable we were, how firmly we believed that we could give each other what we needed. I wonder if we would have gone forward together if we’d known how much pain laid ahead for us? I think I would have. I hope he’d say the same.

At any rate, I’d turned down the posting because of concerns about dragging my  son halfway around the world for four months in the middle of the school year. But I’d made it here on my own terms, in my own time.

I accepted the first tout who offered me a taxi. I knew that meant overpaying, but sometimes a girl just needs something to be easy. I paid $20 for an hour long ride from the airport with a whole van to myself — a king’s ransom in Vietnam and a serious dent in my weekly budget. 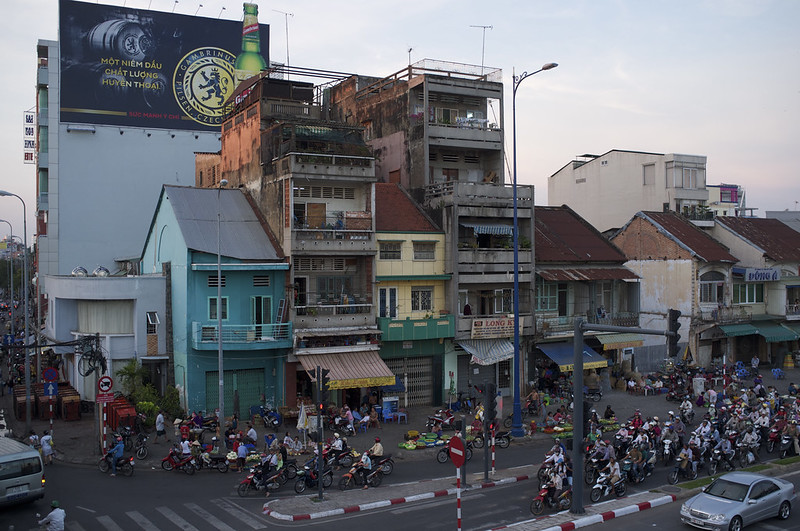 I watched Ho Chi Minh unfold through the windows as we moved toward the city center. The streets are thick with bicycles, pedestrians, and motorcycles. Roads are intimate gatherings when people aren’t safely isolated behind car windows. They wait shoulder to shoulder at each red light, close enough to hear each other’s conversations — or to reach out and snatch a bag. Street food carts block every sidewalk, and women wearing conical straw hats with fabric over their noses and mouths push carts through the chaos, or balance complicated loads in baskets hanging from sticks over their shoulders. 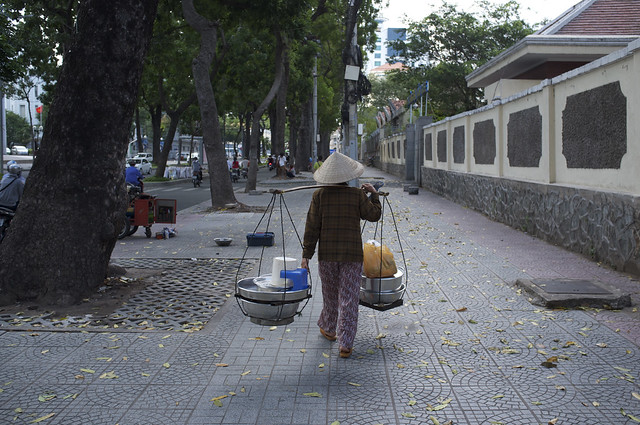 Rows of brightly painted buildings with open-air storefronts at ground level serve as a vibrant backdrop for the unruly energy of the streets. Nearly every block offers a peaceful oasis in the form of an inviting café or bistro, and little French bakeries are hidden among the hubbub. 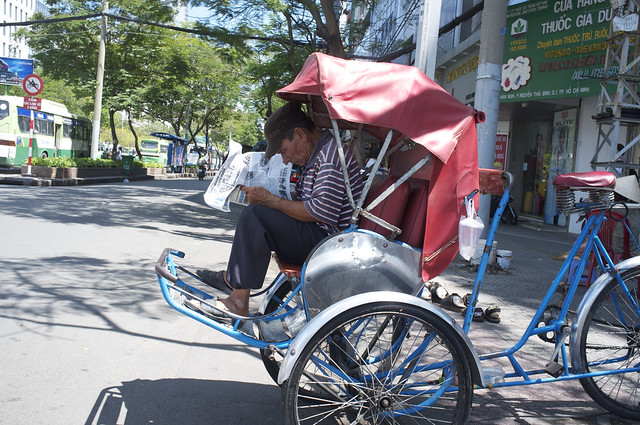 I was travel-weary, but the color and rawness of Ho Chi Minh lifted my spirits. I was totally infatuated with this wild city from the moment I arrived. 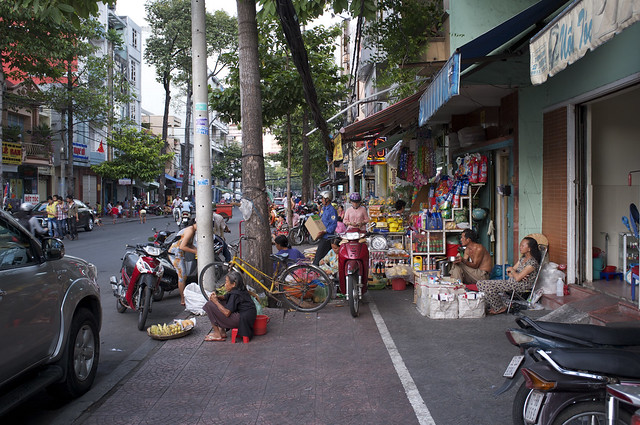 Thanks to some free nights I earned on Hotels.com, I was able to score a room at the mid-priced Elios Hotel. I had a few issues there with service (my dreams of a long soak in a bathtub got dashed not once but twice), but the hotel was perfectly located and I really enjoyed the breakfast buffet in the rooftop restaurant, so I would totally stay there again.

I couldn’t wait to explore this new city — and I was hungry — so I headed out right away with my iPad in my hand. I always bring it when I go out since I don’t carry a phone. It’s my camera, my lifeline to the English-speaking world, and my Kindle app is my dinner companion. I had barely gone out the door before a hotel employee stopped me on the sidewalk. He pointed at my iPad, tucked in its deep pink leather-ish portfolio, and shook his head no. He explained, with words and gestures, that if I walked down the street with it in my hand, it would be stolen.

I understood his concern. Snatchings are a problem in lots of the cities I’ve visited. I usually hold it in the hand away from the street with a firm grip and figure it’s no more at risk than a small purse, a phone, or even a wallet in a back pocket. I felt sure I could handle it. I also have insurance and don’t store any sensitive information in it. I’m not as dumb as I look. My lifestyle has some risks, but I know what they are and I mitigate them.

I put both hands on it and hugged it lightly to my chest, indicating that I would be careful and look after it. He understood, but he shook his head no again. I appreciated his concern and his good intentions, but he wasn’t just advising me. He didn’t intend to let me pass with my iPad in my hand. It was sweet, a little scary, and maddening as hell all at the same time. I thanked him politely, turned on my heel, and went back into the hotel. Two thoughts swirled in my brain like a yin-yang: “How dare he! Would he give orders to a male guest like that?” and “Wow, is this city THAT dangerous?”

I plunged the iPad into my daypack and set back out with it secure on both shoulders. Apparently that was fine; I was allowed to leave the property. For the sake of my own peace of mind, I decided to let the irritation go and just be grateful for his well-intentioned protection.

I also made a mental adjustment to my crush on Ho Chi Minh: It seems my new city-love was the bad boy type. It was like I’d discovered a switchblade in my date’s pocket. 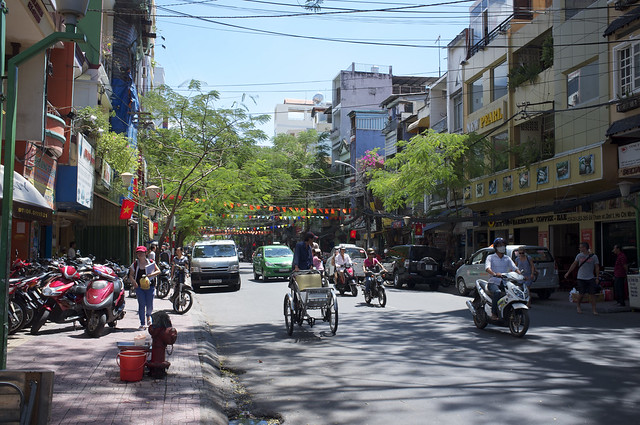