When my plan to leave the country was first hatched, ten years ago, I was staying in a long term relationship ‘for the sake of the kids.’ He humored me, pretending to be working toward the same crazy goal. I let him pretend. I knew I was probably going solo on this voyage. 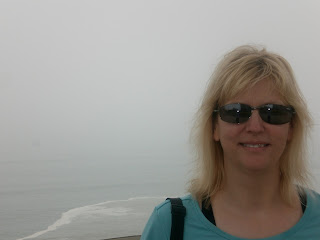 When that relationship had run its course, I was single for several years. Dating for fun, not for a future. By this time my plan had evolved from “move to Italy” to “travel the world aimlessly.” (I’ll tell you why in a later post.)

But then I met a man and fell madly in love. It’s a powerful thing to find your first passionate, tender, healthy romance in your mid-forties.  I thought I had found my soul mate.

I shared my plan with him. He was intrigued. We traveled together and found it glorious, but he had a hard time imagining a full-time life on the road. When he ascended to the presidency of his company, what had been difficult began to seem impossible. Over the next 10 months our relationship slowly unraveled as differing visions of the future collided and disrupted our communication. For a while, I considered giving up my dream altogether and became depressed. He became depressed as well. We were both brokenhearted when we finally parted ways.

At that time, there were seven months left before my target date.

I pined for my lost love, and for the vision of traveling with a companion. Going alone suddenly seemed empty, lonely, and difficult. What fun would it be to see the world without someone to share the adventure? Could I really manage it without someone to share expenses with? What would happen if I got lost, alone in strange cities? Worst of all, would I go years without having someone to talk to, eat with, tell about my day? It seemed possible. It felt sad.

I was lost and uncertain. I had already scheduled the closing of my studio and planned to sell my house. If I didn’t go, what would I do for a living? I had arranged enough writing income to get by in a third world country without a car. I couldn’t do it here.

I was surprised how quickly I met someone else on the dating trail, and — although my heart still ached for my lost love — I was able to laugh with this new man. He was smart, funny, warm and full of life, and I found love in my heart for him as well. Our talk of long-term travel was far from my original plan and centered around where he might get an overseas assignment. I was drifting. I was unhappy. But I had gotten cold feet about going on my own, so I tried to think warmly about making a future with this man. I loved him, I made him very happy, and that felt like enough. (It’s so easy for a woman to mistake her ability to make someone else happy for her own happiness!)

I began to think about how to make a life here, where I would live, how I would support myself.

On a trip to Bogota together, though, something inside me shifted. I knew I didn’t want to come home and save another ten months for the next short break.  I’d been living like that for ten years already. And I really didn’t want an ‘ex-pat assignment overseas’ life, either. I decided I had to face my fear of being alone. That decision felt scary, exhilarating, exciting, and right.

A friend had told me about a book called Tales of a Female Nomad. I read it while lying in a hammock in a Bogota hostel, specifically to see how the author had handled loneliness on the road. She had made friends in hostels, in coffeeshops. She had chatted up people at the airport, talked to women who sold rugs on the street. I could do that. And I had Facebook, and Skype, and friends who would come visit me. I was excited. I was ready!

But it meant walking away from this tender, sweet new relationship. And from the previous one, a man I still yearned for and who had been trying to talk to me about reconciliation. (Yes, all this was happening simultaneously. Yes, it was stressful.) After a lifetime of horrible relationships, I had not one but two magnificent men in my heart.

And I needed to leave them both behind.

I couldn’t keep letting men — even great ones! — slow me down. I was going to have to trust that if one of them was truly meant to be with me, it would happen. And it needed to happen without me sacrificing my dream. I needed to go and become my fullest self before it could happen.

My man was kind and supportive, but he wasn’t able to go forward without some promise of a relationship. I understood that, and we parted good friends. (OK, there was a little more angst than I’m relating here, but you don’t really need to hear about all  that.)

The former Soul Mate, however, surprised me.  I learned that while we were apart, he had been through a major awakening. His priorities and plans had shifted. He was not only working toward the same goal I was, but had actually made more progress than me in some ways! (There is more drama and intrigue in this story as well, but I will spare you the gory details).

We are talking and reconnecting in meaningful ways, and I’m enjoying getting to know his new, more self-aware persona. The connection between us is still incredibly strong. But he will not be going with me (though he will visit and we may come together at some point in the future).  He will be going on his own journey. He jokes about chasing me to the ends of the earth. For most couples, that’s just a figure of speech; for us, it’s the only way.

I need this trip to be mine, not ours. I hope to discover myself on the road, and I’m looking forward to having no one’s needs to consider but my own, for the first time in my life, so I can discover who I am and what matters to me. I remember, after my divorce, when my daughter was gone to college and my son no longer ate at home much, standing in the grocery store aisle and wondering what on earth *I* liked to eat. I didn’t know.  I had never, in my adult life, considered only what *I* wanted before.

The world is a great place to find out what I want.