It was Summer of 2002. The economy was languishing in the wake of 9/11 and the magazine that had been my business and my passion for eight years was hanging by a thread. My partner had just announced that she was jumping ship, and I knew it wouldn’t be long before I was forced to shut the doors. I had no idea what I would do next — probably writing or graphics work.

Meanwhile, my darling children (ages 8 and 15) were growing up fast, and my relationship was rocky on its good days.

Changes were being forced upon me and I didn’t want any of them. I was depressed. I was 38 years old and unsure of what to do with my life. 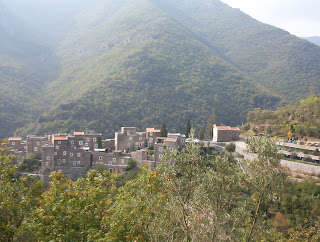 That’s when Fast Company magazine dropped Colletta di Castelbianco in my lap. A centerfold in the magazine served up a gorgeous picture of a mountain village in Italy, a photo that took my breath away. The headline read “La Dolce Vita, Internet Style”. (While working on this blog post, I located the original article that inspired me, but, sadly, not the original photos. These photos are mine, taken a year later)

The story was about a 13th century village in the Italian Alps that had been discovered, restored, modernized and wired for high-speed internet access. It struck me as a fascinating place to live, charming as a fairy tale and about as real.

I set the magazine aside thinking what we all think about things like moving to a medieval village in the Italian alps — “must be nice.” 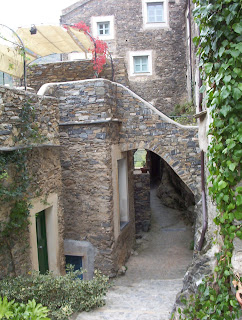 But then, something in my brain or my heart or my soul opened up and a beam of light came in. I picked the magazine up and looked at it again.

“Apartments cost between $140,000 and $330,000.” Well, wasn’t that about the same price as a nice condo in the midwest, or a townhome in a new subdivision? Not so far out of reach. I gave the matter some more thought.

I would need to learn Italian, of course, but I would enjoy that. Could I earn a living from a remote village in Italy? Well… why not? The magazine was closing soon; I could do graphic design, or write, from anywhere with internet, couldn’t I? 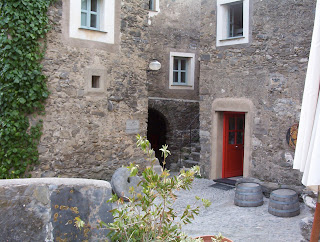 I had ten years until my son would go to college. That was plenty of time to learn a language, and I was going to have to build a new business anyway. Why not build a location-independent one?

Ten years suddenly seemed like plenty of time to make this plan work. I was excited. I discussed the plan with my better half and, not understanding how serious I was, he agreed with a sort of bemused smirk on his face. Sure, ten year plan, move to Italy, I’ll get to work on that.

Step one, of course, was to visit the village, to make sure it lived up to the ideal. I had never been out of the country (unless you count the time I had a toe over the Mexican border at age 10). Didn’t have a passport, didn’t speak a word of Italian. And I was beyond broke. I was going bankrupt. But I gave myself one year to save the money and plan my first trip.  For the first time in a long time, I was energized, alive, and excited about the future!

That trip was glorious, and the village lived up to all my expectations. I also discovered that I really enjoyed planning the trip. All my internet shopping skills translated into an ability to find cheap flights and interesting lodging options.

And I discovered that international travel was much more affordable than I’d previously imagined. I spent 10 days in France and Italy for about $1500 – less than most people spend on their cable TV bill in a year. I started planning annual trips — with my kids, with my partner, and alone.

By the time I revisited Colletta on a trip to Europe with my daughter, it had changed. The folks from nearby Monaco had discovered it, and turned the village into a trendy vacation hub. Prices were now sky-high. But, by this time, I’d learned that the world is full of gorgeous places, and a new plan was forming.

A trip to Europe cost me $1500 or more because flights cost $800-1200. But once I got there, I could go easily from city to city on buses or trains cheaply enough. And it cost no more to stay in a fully furnished vacation apartment than to stay at home.

If I could eliminate the cost of going home between trips, I could travel very cheaply and just keep going from place to place.

It took me years to build an income from freelance writing. I figured I needed 10 projects, that would each net me about $100 a month, to get started, and then I could continue building the income on the road.

So that’s where the plan came from and how it developed. And here’s the takeaway message, in case you missed it: If your dream seems insane and impossible, consider making a 10 year plan. 10 years will pass whether you’re chasing your dream or not. Your goal may change during the 10 years, and that’s OK.

Sacrifice is how you measure your commitment to your dreams. What are you willing to give up to have this? Can you live without cable TV? Without a cel phone? Drive an old beatup car? I once knew a man who lived without electricity for four months to finance a trip he wanted to take.